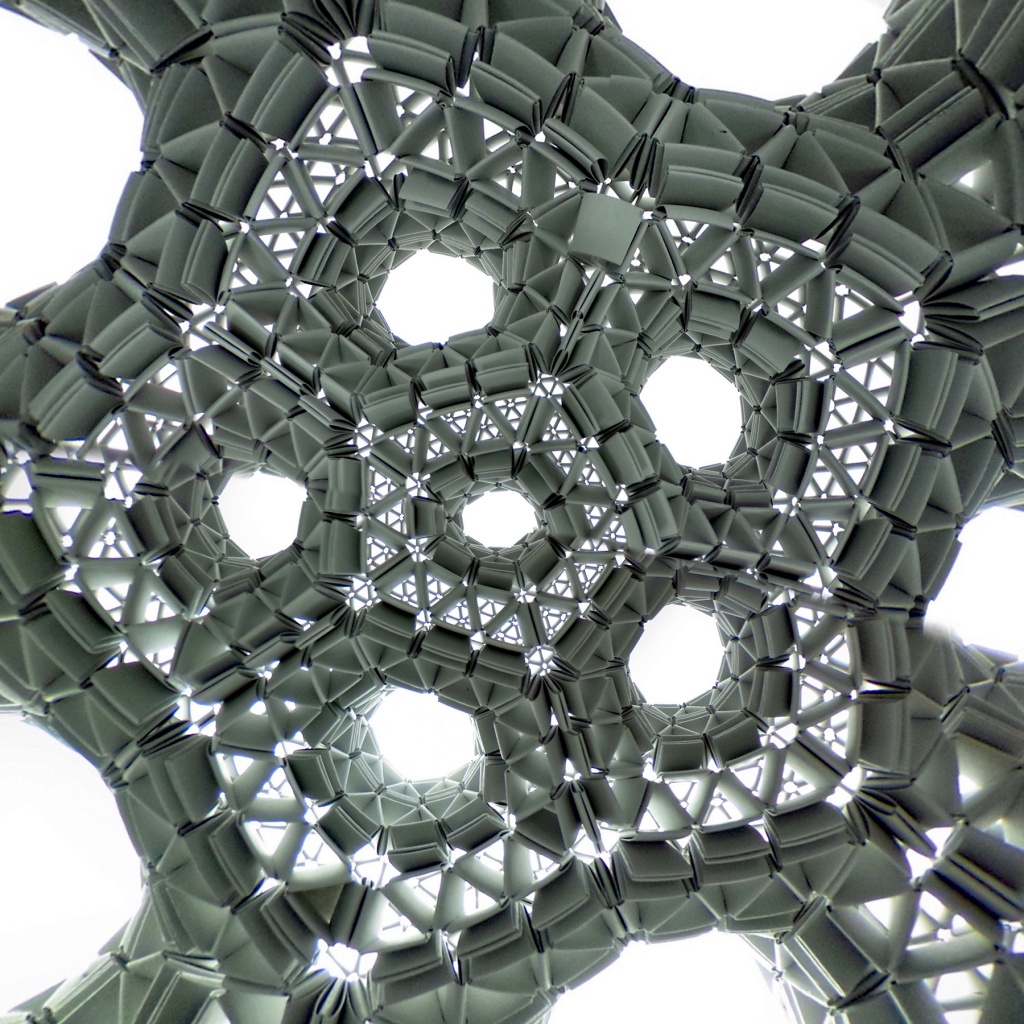 The sculpture was made entirely of cardstock strips with no glue, but had the precision of something made on a 3D printer. The dodecahedral symmetry of the object was quite apparent, but the topological classification of the entire surface was less obvious. There were 12 holes on the “outside”, each corresponding to a face of a dodecahedron. Plus, there was a hole in the center, which was connected to the others.

If you imagine stretching out one of the 12 “outside holes” until all the holes lie flat on a table, as in the figure below, you can count 11 holes in the middle– but this turned out to be quite an exercise in imagination, even for some seasoned mathematicians. 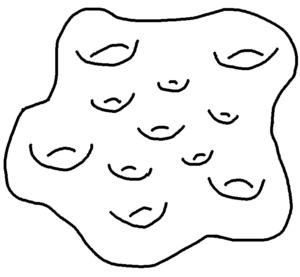 I thought that a spherical camera placed inside the dodecahedral torus would be able to tell the story better than I.  I had used the Ricoh Theta S earlier to show that a cubical framework is topologically a torus with 5 holes. However, the holes of Dave’s structure were too small to fit my camera.

When I explained my dilemma to Dave, he graciously agreed to build another version of his award-winning structure, this time with holes that were large enough to accommodate my spherical camera. Here is a picture of this second version of the 11-holed torus taken with a Mamiya 645 medium format camera:

My first shot at a spherical photograph was in a campus parking lot:

You can explore the picture by clicking your mouse on any spot and dragging it.  The dark spot is the hole in which I put the spherical camera. The camera was remotely controlled via an app on my mobile phone. The camera itself has been edited out by the processing software, but the spot is dark because light cannot reach it. Explore the 5 holes around the dark spot. When you zoom in, you will see a hole with a couple of cars in it, and another one with green hedges, and the pavement. Most of the holes are gray since it was an overcast day.

In order to make a 2-dimensional print of the spherical image, one needs to choose a projection from the sphere to the plane. There are many such projections to choose from, and software packages exist which can instantly produce several types of projected images from a spherical one.  The  stereographic projection, which preserves angles while distorting lengths, is particularly attractive here. In the world of spherical cameras, it is called “tiny planet”. The process of creating a stereographic projection of a spherical image is beautifully explained by Paul Bourke of the University of Western Australia here.

Since the dodecahedral torus can be viewed as an approximation to a sphere, the natural place to have the lens of the camera to create its spherical image is in its center.  This way, the spherical image will be symmetric with respect to the 12 “faces” of the torus. However,  the eye of the camera is 4 inches from the ground,  while the center of the dodecahedral torus is about 7  inches from the ground. Simply elevating the camera does not give the best photographic results, since, when the torus rests on one of its “dodecahedral faces,” no light can enter through the hole in that face.

I found that the cheapest way to create a set up where the lens of the spherical camera was approximately at the center of the torus– while light could still enter from the hole in the face on which the torus was resting–was to tape the camera to a gallon plastic water bottle, as shown below.

When placed over the camera, the dodecahedral torus rests on the wider part of the bottle, and the eye of the camera is close to the center of the torus:

Finally, I had to decide on the background– i.e. what will the camera see outside the 11 holes? I wrestled with this question for a while; what did I want to say with this picture? Did I want to show how wacky the world looks through the eye of a 360 camera, stereographically projected onto a plane? After playing around with some pictures in a natural setting, I decided that I really wanted to focus on the intricate symmetry of the torus; in particular, on the many pentagonal structures that became apparent in the spherical shot. Thanks to Dave’s precise craftsmanship, it was now possible to see shapes I had not anticipated, like the whitish pentagon outline around the center hole, and another one around the 5 holes. The viewer can also see the effects of exaggerated perspective in the picture, with seemingly many equilateral triangles “fitting into” one equilateral triangle. In reality, the triangles are all the same size. I decided not to distract the viewer with any background, and cover the entire structure with a white photo box:

In the end I selected these two stereographic projection images, both of which show the 11 holes of the dodecahedron.

This is my submission to the Bridges Exhibition of Mathematical Art at the 2019 Joint Mathematics Meetings in Baltimore.