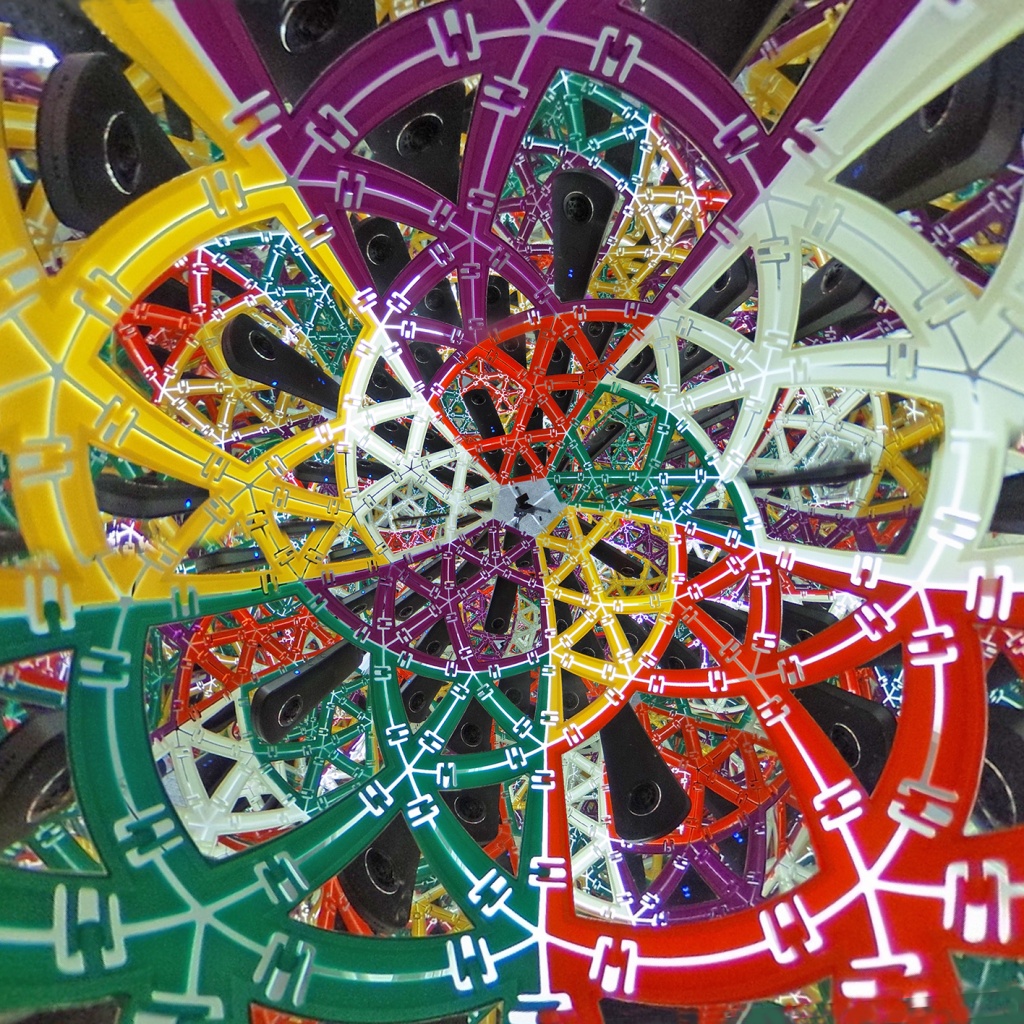 I recently participated in my first collaborative art project with Bjoern Muetzel, Ph.D.  We had so much fun working together and were so encouraged by the warm reception of our work at the ICERM Illustrative Mathematics program, that we decided to collaborate on another piece to submit to the Joint Mathematics Meetings in 2020.

We were intrigued by the snub dodecahedron because it is one of just two chiral Archimedean solids. Chirality roughly means having a right- or left-handed orientation — like a screw, for example— and explained further in a previous blog. At 92 faces, the snub dodecahedron is a fairly good approximation of a sphere, but its chirality is not easy to see. This made it an ideal subject for a photograph by a spherical camera. We covered the inside of the faces with mirror sheets to further enhance the aesthetic and mathematical richness of the viewer’s experience.

The next step was to set up a spherical camera inside this object so that the lens of the camera was as close as possible to its center. This took some playing around: 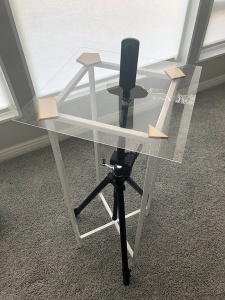 What you see in this picture is a spherical camera mounted on a selfie stick which is mounted on a conventional tripod. This is all to ensure that the lens of the camera is at the height of the middle of the snub dodecahedron. The height is dictated by the white metal frame table — I had only one such table, and its height was not adjustable. The tripod and the selfie stick were at their lowest height settings, but the lens was still a smidgeon too high relative to the snub dodecahedron. So I elevated the plexiglass sheet on which the snub dodecahedron would rest. The polygons used for the elevation happened to be the stencils used to cut the mirrors. 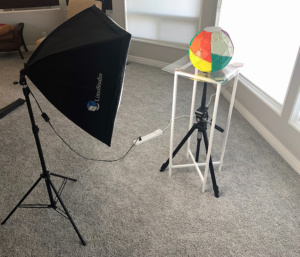 After carefully tweaking the height of the plexiglass platform, I placed the snub dodecahedron on it, added some light to balance the light from the window.

The raw output of the spherical camera was transformed via stereographic projection from the “pole” where the camera was inserted, resulting in “The Right Rose” below:

One of the key properties of stereographic projection is that it maps great circles on a sphere to circles on the plane. The “petals” tangent to the boundary in the above picture are the images of edges that, pairwise, form approximate arcs of great circles. 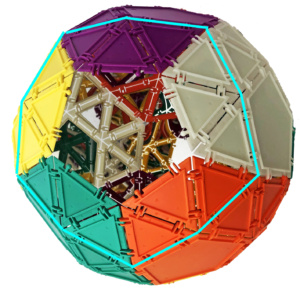 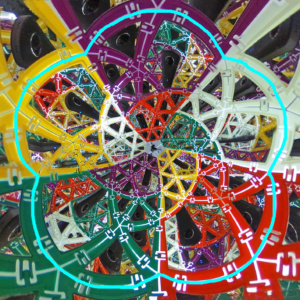 Unlike the medieval rose windows, this rose is right—in the chiral sense! We are not arrogant in claiming that this is the right rose; we are just noting that the inner flower seems to spiral in the right direction. And we’re obviously fond of dorky puns!

Next, note that the orders of sequences of colors at the two poles are reversed. This reversal is a necessary condition for 5-coloring the solid while keeping the sequences of colors the same. On the inside, a psychedelic mirror landscape reveals itself whose fractal geometry is reminiscent of the view into hyperbolic 3-manifolds.

This blog article is a submission to the Joint Mathematics Meetings 2020 Art Exhibition. The submission had been accepted, and we were honored to be a part of this Exhibition.