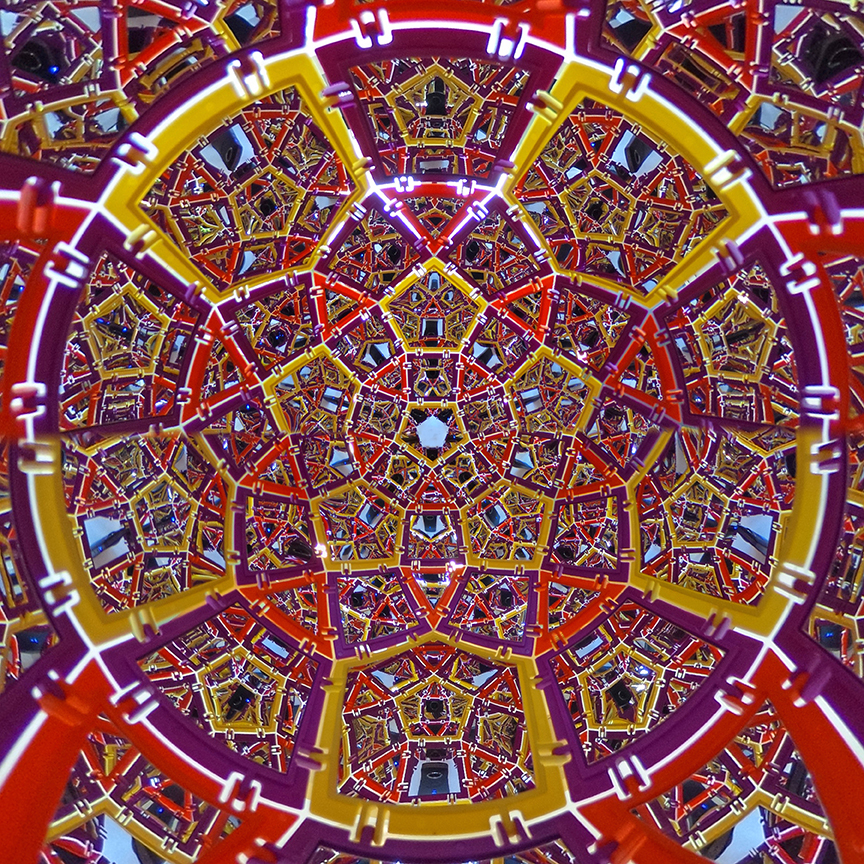 Several months ago, Bjoern Muetzel, Ph.D., had the idea to glue plastic mirrors to the inside faces of a dodecahedron made of Geometiles. Of course, one of the faces would be left out so the viewer could appreciate the psychedelic landscape inside. Bjoern took this object for a test run at the National Math Festival in Washington D. C. in 2019, and the results didn’t disappoint. He would ask an unwitting child to look inside the kaleidoscopic dodecahedron, and the reaction was always beyond words.

The morning after the festival, I got a chance to stick my spherical camera inside this object and take a picture. The result was intriguing, and Bjoern wanted to take it further by building a similar rhombicosidodecahedron: 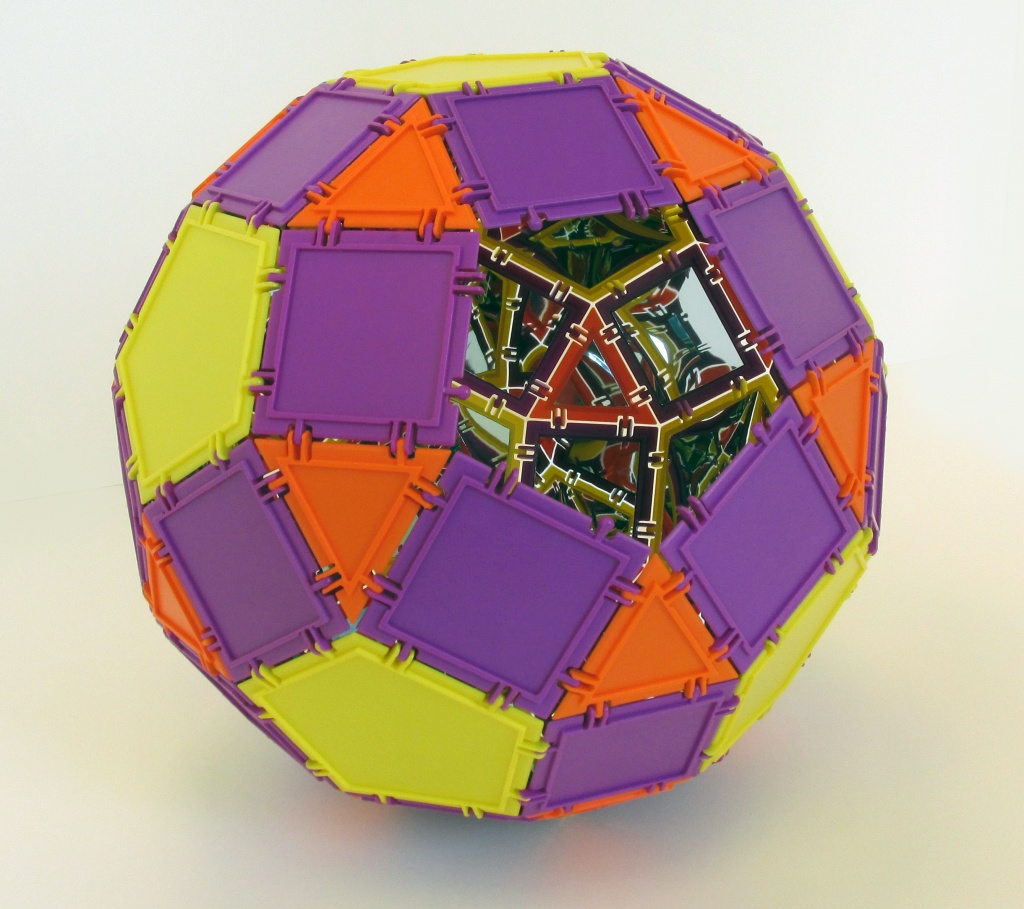 In order to get the best possible image, we had to experiment with the position of the camera in the polyhedron, as well as the ambient light. The latter is tricky, since light can come into the Geometiles rhombicosidodecahedron only through the thin crevices between the tiles, and from the bottom face where the camera is placed. I say “we” even though it was Bjoern taking the pictures at Dartmouth College, and I was processing the raw images in California. At some point, things got downright comical: I was making recommendations on where to shoot the pictures based on pictures of rooms on the Dartmouth campus that I had only seen online. We finally got a few striking results:

This is the stereographic projection of the polyhedron from the “pole” where the camera is inserted. 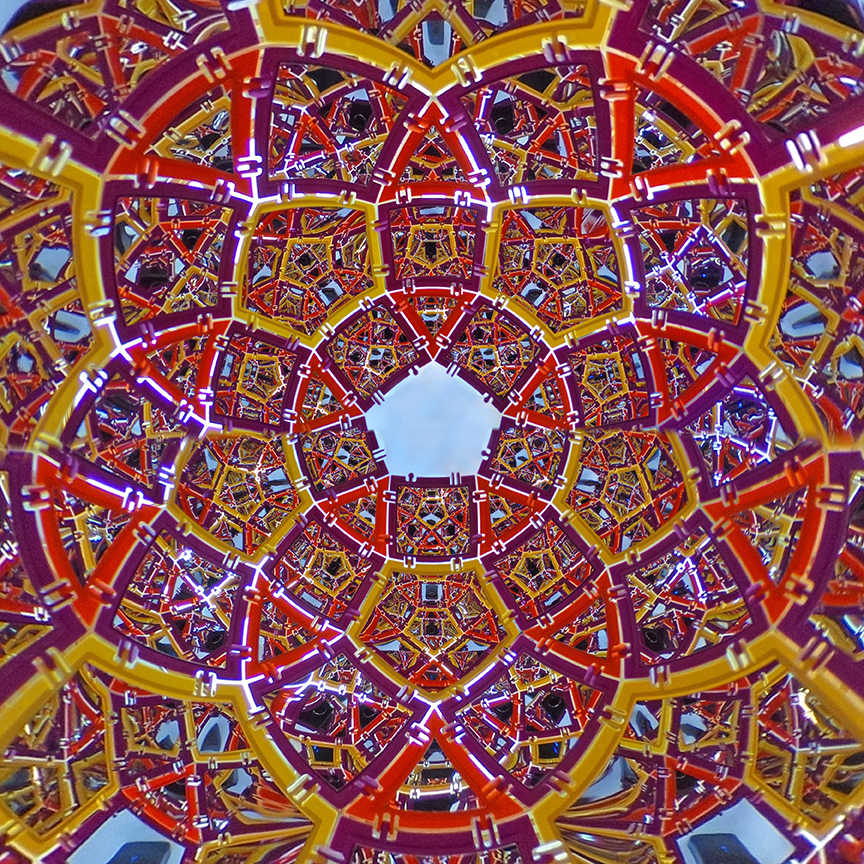 This is the stereographic projection of the polyhedron from the “pole” opposite to where the camera is inserted. It’s interesting that the two projections are quite different from one another. Clearly, the camera was not exactly at the center of the rhombicosidodecahedron, but this made the results even more intriguing. One can see from the “tightness” of the circles of the first image (projected from camera “pole”) that the camera was a little lower than half way up the rhombicosidodecahedron. Still, it was close enough to the center that we see reflections of the pentagons, with squares and triangles surrounding them, inside other pentagons. The images bounce back and forth among the mirrors. It’s as if Archimedes is playing billiards inside one of his solids! For a parting view, here is a video animating the process of changing “poles” in the stereographic projections:

Note: The Ricoh Theta software tries to edit out the actual camera from the image. This is why you “almost” don’t see the camera at one of the poles. However, the software leaves intact the reflections of the camera in the various mirrors.

This blog article is a submission to the ICERM’s fall 2019 “Illustrating Mathematics” event at Brown University. The submission was accepted and now resides at the virtual ICERM gallery.

Yana Mohanty, Ph.D., is former math lecturer at the University of California, San Diego and Palomar College, and inventor of Geometiles. Follow her on Twitter: @geometiles.

Bjoern Muetzel, Ph.D., is a lecturer in Mathematics at Dartmouth College, Hanover, where has been also John Wesley Young Research Instructor.