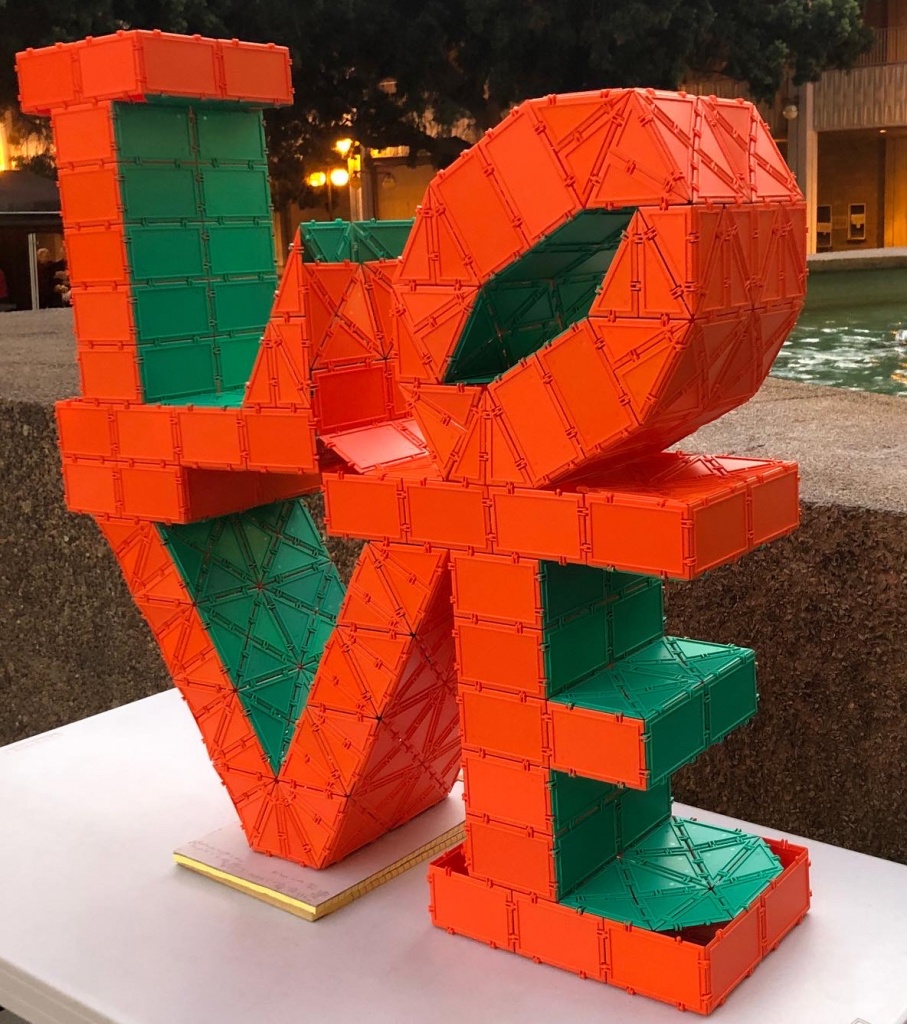 This past Valentine’s Day I decided to build a Geometiles version of Robert Indiana’s iconic Love sculpture. I wanted to build it in an urban setting as a sort of pop-up public art installation. I think I was partially inspired by Denver’s Blue Bear as an example of a piece of public art that was truly a collaborative project between artists and engineers.

I challenged myself to build the Geometiles sculpture as a single piece- rather than letters placed upon one another. As a result, not only did each letter have to be a reasonable approximation of the one in the original Love sculpture, but the letters had to be connected to each other in a structurally sound way.

If there ever was a time for seamless integration of the artistic and the technical, this was it. Compromises had to be made, and I had to decide which aspects of the original structure were the most important (artistic), and whether I could build a structure that could convey them without falling apart.

I ended up using only 4 types of Geometiles pieces: the rectangle, the isosceles right triangle, and both of the scalene triangles. The “O” was most challenging because of its large weight. It was threatening to collapse onto the “E”. What you see in the picture is the largest O that was not going to break the whole structure with its weight.

Note also the notepads under the “V”. These need to be there to adjust the height of the “V” to be the same as the height of the “E”. If they were not at the same level, the structure would not hold together. There was a fun trigonometric calculation involved to see how tall the stack of pads needed to be:

The final structure was made of almost 600 Geometiles pieces and weighed about 12 pounds. It was built on San Diego’s Civic Center Plaza, with the “Bow Wave” fountain by Malcolm Leland in the background.

The Geometiles LOVE sculpture provoked the curiosity of children as well as adults who were wondering how it was made and with what materials. This piece of public art was full of STEAM!